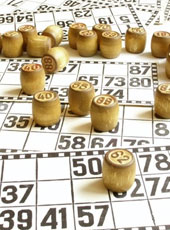 Unlike online blackjack or roulette where you have to know much about betting rules and playing options, in the game of online bingo, the bingo cards are the most important items. Bingo card is a blank with certain number of square each having imprinted number. All the numbers are different. During the game a player needs to mark called numbers in the card if it contains them, and in this way to create a combination of marked squares.

Bingo cards differ according to the type of the game. During the years of existence of bingo these cards almost had not changed. The only difference may be found in the way of production these cards. At first all the cards were made by hand, but now with the use of computers and the RNG, it became easy to create thousands of unique cards in a couple of minutes.

In the US the bingo cards are a 5 x 5 grid with a free center square and numbers from 1 to 75. Each column is marked with a letter of the word B-I-N-G-O consequently. In some patterns this free square is used, in other it works as a Wild square that should be daubed at the beginning of the game.

Playing bingo, no matter which type of game you choose, remember that the only rule you should always stick to is to have fun. Without that you will not be able to get pleasure from the game. Finally, we would like to draw your attention to compulsive gambling. No matter you prefer blackjack game, poker, Bingo or slots, you gambling habit can have bad consequences. Always remember about time and gamble reasonably.

© No Deposit Bingo, 2022 All rights reserved